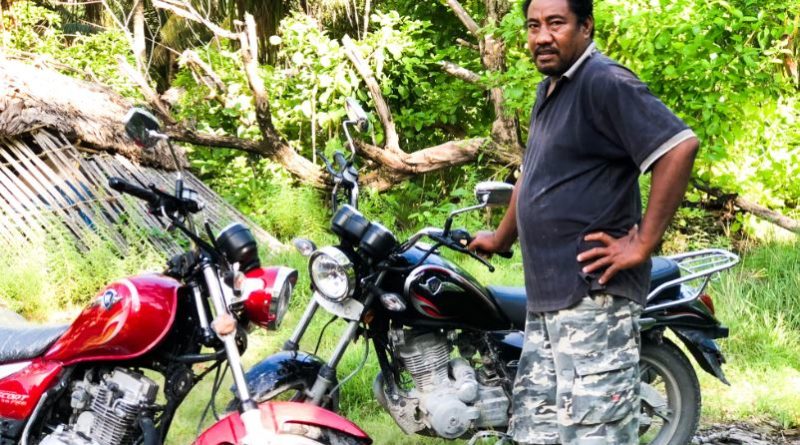 Biroto, a vegetable farmer on Abaiang Island in Kiribati, is one of the 5 brothers in the family and married to a beautiful woman named Teburenga to Bweebwe. He is living in Abaiang for more than 20 years now and has 4 children. In 2017, his oldest son was in his final year of primary school and ready to join the secondary school the following year. Because of his oldest son, he began to worry more and think of how to get his school fees in the coming years and think of other livelihood expenses like food, clothes, church contribution and so forth. Back then, Biroto’s main source of income derived only from selling copra and fish but this was not enough to even meet his daily expenses.

In 2017, he decided to join the Abaiang Vegetable Growers Association as he thought this is another way of earning extra money. So, he managed to ask the committee representative in his village to pay his registration fee of $1.00. Biroto did not have any agricultural background when he first joined the organization, but he was committed to learn and attend every training and workshop conducted by the extension officer. Biroto was living miles away from the training centre but the farmers’ association through the assistance of the extension officer provided free transport for all members. During the training the extension officer provided free seedlings to all members so after every training Biroto brought back 2 trays of seedlings for his garden.

He began his household mixed garden (10m by 10m) and planted 100 cabbages. When the cabbage was ready to harvest, he domestically sold the cabbages at the price of Au$2.50 per head to the locals and some retailers on the island. He earned Au$250.00. He continued planting and selling these until he managed to sell 200 cabbages in South Tarawa and earned more than Au$600.00. After a few months, he now received more than Au$2000.00. Besides cabbages, he decided to sell pig meals (copra mill) and started with 50 bags of copra meals and sold it for a price of Au$6.00/bag. In return he earned $600.00. On the other hand, his wife Teborenga also served the students with lunches and sold lunch boxes for the price of $2.00 for each box.

The Ministry of Environment, Lands and Agriculture Development (MELAD) provided additional training to him in using an integrated piggery and compost production system designed for him to fertilize his cabbages to avoid soil depletion and to use the land sustainably.

After saving money for several months, Biroto was able to buy a motorbike at the cost of $1890.00 so that he can rent it out and gain more money. He bought 1 brand new motorbike and rented it out at a rate of $20.00 per day. At the end of Dec 2017, Nabirito and his wife are satisfied because they now got more than what they have been dreaming of and they are ready to meet their expectations and expenses and are aiming to grow their business more. In the future the family wants to open their own canteen with their own food ingredients.