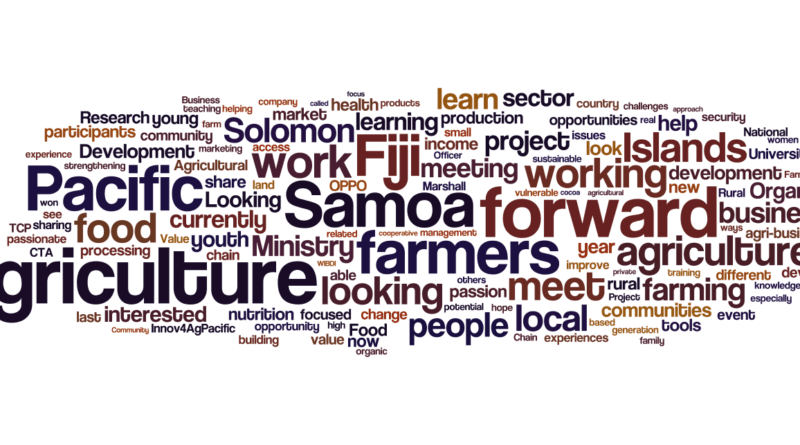 The second Pacific Week of Agriculture (PWA) explored how dynamic partnerships can help to address some of the major challenges facing the agri-food sector in small island states in the region. Held in Apia, Samoa from September 30 to October 4, the theme of PWA 2019 was Enhanced partnerships for sustainable agriculture and forestry systems in the Pacific. The event followed the inaugural Pacific Week of Agriculture held in Vanuatu in October 2017.

“We are very pleased to see that the Pacific Week of Agriculture is becoming an important regional forum, since we had promoted the concept of a major unified event for agriculture stakeholders for a long time, and were instrumental in developing it, in partnership with the Food and Agriculture Organization of the United Nations and the Pacific Community,” said CTA Director Michael Hailu, who opened the CTA Innov4AgPacific workshop on 30 September.

“CTA is strongly committed to the sustainable development of the Pacific agri-food system,” he added. “Increasing the supply of and access to affordable locally produced nutritious food is of paramount importance in combatting non-communicable diseases and micronutrient deficiency in the region.”

Echoing the theme of working together, the Innov4AgPacific project – which seeks to increase rural people’s access to nutritious and healthy food by promoting local food crops and fisheries value chains in seven Pacific countries –had a strong presence at the PWA.

Now in its fourth and final year, the project is led by CTA and co-funded by the International Fund for Agricultural Development (IFAD), and implemented in partnership with the Pacific Islands Private Sector Organisation. The focus across the board of project activities is promoting cross-sectoral and multi-stakeholder engagement to help develop and upgrade value chains for improved nutrition and incomes.

The regional cross learning and integrated business plan write shop was the first of a rich programme of side events planned by the Innov4AgPacific project during the PWA. The workshop has been designed to promote partnerships and joint learning across the various interventions, organisations and countries involved in the project. During the week, participants continued documenting their experiences in developing value chains for nutritious local products, and write business plans to attract funding aimed at upscaling the most successful initiatives.

“This week was an opportunity to learn what we have done, what we have achieved, and where we want to go together,” said Judith Francis, Senior Programme Coordinator of Science and Technology Policy at CTA and leader of the Innov4AgPacific project, which targets Fiji, Kiribati, Marshall Islands, Samoa, Solomon Islands, Tonga and Vanuatu.

Pacific island states share a number of challenges that make them uniquely vulnerable to food insecurity and poor nutrition. These include limited land, fragile natural environments, high vulnerability to climate change and a strong dependence on food imports, which is fueling a range of diet related health problems. A rapid rise in overweight, obesity and associated non-communicable diseases (NCDs) in the Pacific over the past three decades has had a devastating effect on public health. Pacific countries now account for the top seven most obese countries in the world, and for seven out of ten countries with the world’s highest prevalence of diabetes.

However, a key finding from the project is that NCDs are both preventable and reversible if concerted and targeted efforts are made to improve nutrition, particularly by developing value chains based on nutritious Pacific foods – a strategy that can also help to drive the economy. Organising Pacific farmers is key to value chain development, and transforming Pacific agri-food systems can play a critical role in empowering women and youth, project research has shown. Strong partnerships between the public and private sectors, together with producers, can be powerful catalysts for improved nutrition and incomes.

Assessing progress, impacts and lessons learned during project implementation was a major focus during the PWA in Samoa. Among initiatives being reviewed are:
• Capacity building for organisations and individuals
• Promoting innovation in Pacific small and medium enterprises
• Scaling up community nutrition
• Scaling up information and communications technologies for agriculture (ICT4Ag) innovations.

“One thing we have learned is that no single individual or organisation can do it alone,” said Judith Francis. “We have adopted a multi-sectoral approach, and now we want to take it to the next level. We were at the PWA to see how we can scale it up. Together we can go much further.”