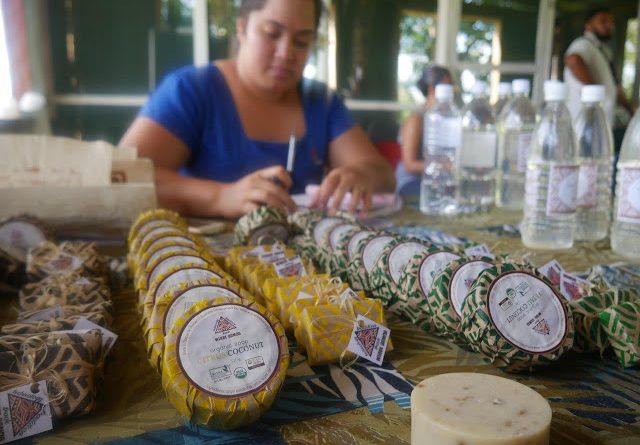 Non-communicable diseases (NCDs) are among the leading causes of premature death in Small Island Developing States (SIDS) in the Pacific region. High rates of obesity are linked to diabetes and hypertension. At the same time, vitamin and mineral deficiencies are affecting the health of children and women. The shift from a traditional diet of fresh fish, fruits and vegetables towards the consumption of imported highly processed foods such as sweetened carbonated beverages, tinned fish and fried snacks, though more convenient and lower priced, threaten food and nutrition security (FNS). Furthermore, a decline in crop production, climate change, overfishing, volatility in international commodity prices and limitations in the policy and institutional environment increase the cost of local foods and pose additional pressure on health, incomes and natural resources. While over 20% of the Pacific Islanders already live in hardship, this situation can worsen as the population is expected to double by 2050.

Pacific islanders are taking matters into their own hands, as shown in recent stories featured by The Guardian and the New York Times . Father Luc Dini – a retired Anglican priest, community leader and head of the local tourism council in the northernmost province of Torba in Vanuatu – has announced that together with other leaders, he aims to preserve the local food production and consumption patterns, grow organic food, and permanently ban the import of junk food by 2020. According to this plan, Torba would become the first province in Vanuatu with the capacity to produce nutritious wholesome food, which traditionally is organic “by default” and increases access to healthier options and agri-business opportunities. Torban tourism bungalows are already solely supplied with locally grown organic products.

Like Father Luc Dini, many other Pacific Islanders want to take advantage of the full potential of the knowledge and commitment of their communities to promote and increase local food production in a sustainable manner to ‘grow healthy’.

The most important challenge is: How can successful programs that enhance the production and consumption of more diversified, healthy and nutritious local foods be promoted and scaled up in the Pacific Islands to benefit more farmers, grow agri-businesses and sustain communities?

The International Fund for Agricultural Development (IFAD) Grant entitled “Leveraging the development of local food crops and fisheries value chains for improved nutrition and sustainable food systems in the Pacific Islands of Fiji, Kiribati, Marshall Islands, Samoa, Solomon Islands, Tonga and Vanuatu”, which is co-funded by the Technical Centre for Agricultural and Rural Cooperation (CTA) and implemented in partnership with the Pacific Islands Private Sector Organization (PIPSO) aims at answering this question. The main goal is to strengthen the capacity of the Pacific Island governments, farmer and private sector organizations, and sub-regional institutions to develop strategies and programs, as well as mobilize financing, that can increase poor rural people’s access to nutritious and healthy food. The joint program, was launched during the 2nd Pacific Agribusiness Forum in Samoa in August 2016 and is adopting a three pronged approach (AAA) to: Analyze (build the evidence base), Act (build capacity for change) and Advocate (lobby for policy change and development impact) for value chain and agribusiness development.

At the launch, Ron Hartman, IFAD Country Director with responsibility for the Pacific Islands indicated that “this regional grant aims to complement IFAD investments in the Pacific by mainstreaming nutritionally, culturally and environmentally sensitive value chains in Fiji, Kiribati, Marshall Islands, Samoa, Solomon Islands, Tonga, and Vanuatu. It will also work to improve the policy, regulatory and business environment for value chain development and engagement of the private sector”. CTA Director Michael Hailu added that “the active engagement of the private sector is critical for the transformation of the agrifood sector in the Pacific to address major challenges of food security, nutrition and climate change resilience.” PIPSO’s CEO Mereia Volavola acknowledged that “linking agriculture to tourism-related markets is key for agribusiness development in the Pacific region.”In addition, the Governments of Samoa and Vanuatu – together with CTA, PIPSO and IFAD, and with the support from the Pacific Islands Farmers Organisation Network (PIFON) and the Southern Pacific Community (SPC) – also conducted national policy setting workshops in 2016 to improve the linkages between sustainable agriculture, trade, tourism and health. As a stepping stone, the Government of Vanuatu organised its first Agritourism Festival in Port Vila, in November, and heralded it as an innovative approach to promoting healthy local foods while boosting the local economies. However, Honorable Matai Seremaiah – the Vanuatu Minister of Agriculture, Livestock, Forestry, Fisheries and Biosecurity (MALFFB) – noted that the linkage between agriculture and tourism has not yet been sufficiently explored in Vanuatu and that such festivals will help in getting locally grown food from farm to fork. The complementary Chefs4Development initiative aims to promote stronger linkages between value chain actors in the culinary and agriculture sectors, with a view to enhancing the inclusion of locally sourced food and agrifood products in menus served in food establishments across the Caribbean, South Pacific and the Indian Ocean.

In April 2017, the launch of the cookbook “Kana Vinaka” by Chef Colin Chung and Greg Cornwall took place in Suva, Fiji. The book showcases the use of Pacific local ingredients to prepare healthy meals. It complements the Project’s ambitions of promoting Pacific local crops and fisheries value chains.

IFAD, CTA and PIPSO are continuing to join forces to support Pacific Islanders to realize their ambitions to live a healthy life and increase their incomes by building local capacity to take advantage of sustainable food production and processing, effective policies and regulations and adequate financing mechanisms.

This blog was originally posted on the IFAD social reporting blog.